Caroline and Wyatt’s fall wedding at the Greenbrier Resort in White Sulphur Springs was indeed a wonderful celebration of all of those things!  When I asked why they had selected The Greenbrier for their wedding venue, Caroline shared:

“I am the youngest of four, and my mom has always said that one of us HAD to get married at The Greenbrier, and as it turns out, I am the only one left! The Greenbrier was the first location we visited right after we got engaged. It is the absolute dream wedding venue! We love the bright colors of the main building and how beautifully simple the chapel is in contrast.”

Caroline’s sisters served as dual Matrons of Honor, and toasted the new couple at the reception with a poem that both welcomed Wyatt to the family and shared so many moments from their relationship.

Caroline and Wyatt met on the shores of the Outer Banks in Corolla, NC, while working summer jobs during college.  After dating for 3 years Wyatt carefully dodged all talk of marriage so that he could surprise Caroline . After asking her father for her hand in marriage, Wyatt got the ball rolling. He and Caroline’s mother began to plan a big engagement party disguised as an Independence Day party in Corolla, NC. Two nights before the trip, Caroline came home from work expecting a casual dinner and a glass of wine. Wyatt pointed out a bottle of their favorite vineyard and suggested Caroline pour them a glass as it was a “special edition” bottle. She turned the bottle and found a label reading “Caroline, will you marry me?”

Caroline and Wyatt planned a laid back wedding day, with plenty of time to enjoy friends and family, with a little fun thrown in.  Caroline and her bridesmaids gathered in the Princess Grace Parlor to spend the morning prepping their hair and makeup (and enjoy some Greenbrier treats and champagne).  Wyatt and the guys spent the morning clay shooting, then enjoyed a casual lunch at Slammin’ Sammys (and some table games in the rotunda) before suiting up for the wedding ceremony.

All images provided by Hopkins Studios

In addition to the usual wedding finery, both had some traditional heirloom pieces that they included on their wedding day.  Wyatt wore his father’s ring and Caroline wore her mother’s garter and the veil which worn by both of her sisters at their weddings.

Caroline and her father enjoyed a ‘first look’ outside the North Parlor before riding to the chapel in a horse drawn carriage.

Following cocktail hour in the Trellis Room, the couple danced the night away to music by Total Exposure while Ben from Wed on Canvas captured the magic of their first dance with a live painting.  To make sure the kids had just as much fun as the adults, they arrange for childcare and bowling in the Greenbrier Bowling Alley. 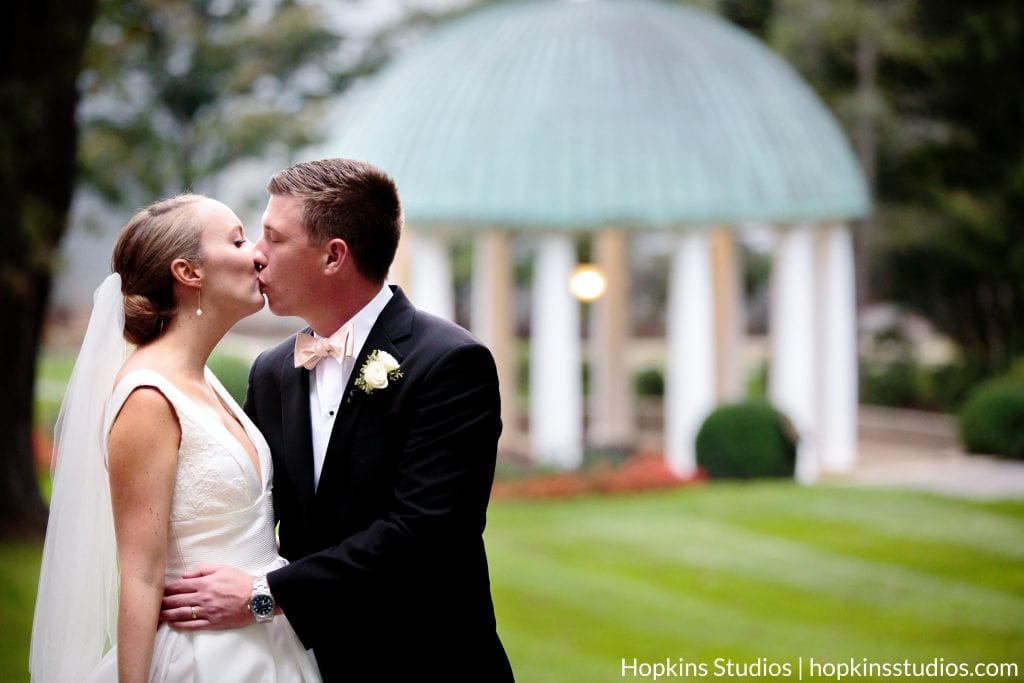